When we exited the Panama Canal, we needed to replenish Joyful’s diesel supply for the very long non-stop passage to Nuku Hiva, an island in the Marquises Archipelago in French Polynesia, 4,000 miles away from the Panama Canal. So we had to anchor Joyful near a tiny island, only a few minutes from the Pacific entrance to the Panama Canal, where we spent a restful night and motored Joyful in the morning to the entrance of the Isla Flamenco Marina to refuel. There we requested permission via VHF radio to enter the marina and to buy diesel. They gave us permission, but said that they were refueling a large motor yacht, and we would have to wait for three hours out side the entrance. As Joyful waited amongst other boats a few hundred yards outside the entrance, we could see the beautiful, modern skyline of Panama City, only a few minutes away, and many interesting ships and international yachts at anchor around us. We were quite happy and thankful that the marina hailed us on the VHF to say we could enter the marina and obtain diesel one hour early! While there, Jeff and I also purchased some food to replace the stock we had consumed from Key West to Isla Flamenco. The tiny store was stocked with lovely food from Europe and some tasty food from the USA. We could buy our favorite things from both continents, which was a real delight! I also selected several lures, hooks, and line, etc., for deep sea fishing, in case we wanted to fish from Joyful along the circumnavigation. Jimmy suggested a simple silver metal basic fish lure with two hooks attached, a heavy fishing line, a short gaff, and a big appetite! So that’s what I bought, but the artist in me also got caught up with those multicolored, squid looking lures. So I bought some of those, too! Watch out you Mahi-Mahi, you!

There was too much current around Isla Flamenco to take a Secchi depth reading, unfortunately. But we looked forward to attempting to take phytoplankton data with the device during the passage to French Polynesia. We are so excited to use the Secchi disk that the Round Hill Elementary School Bears made for Joyful! Those young scientists in Mr. Muldowney’s fifth grade science class are AWESOME! Thank you soooooo much, Round Hill Bears!

During this one day and night stay at the Isla Flamenco, we saw many interesting and magnificent birds. They were very fast flying birds. In fact, they flew so fast we couldn’t get a photo of most of them! They were all sea birds, some with snazzy angular swept back wings like a sophisticated stealth bomber, some that looked like a kind of sea gull, but we were not sure, and others we knew exactly what they were: Pelicans! Those pelicans are remarkable aviators. They flew high above the surface of the sea, scanning the water to find fish, and in the blink of an eye, they suddenly changed the angle of their feathers which allowed them to dive full speed into the water, someway not harming themselves in the process! Almost every time, when they surfaced seconds later, they raised their bills above water, and swallowed a fish or two that they had scooped up in their bills! Then, before they could even smack their lips, out flapped their strong huge wings, they kicked their big webbed feet, and pushed off the water’s surface as they flew up and up, up to scan the sea for more tasty critters!

Artistic Inspirations from the Lord About this Landfall – As we spent the night in the Isla Flamenco anchorage, only about 1/2 mile away from one of the world’s most heavily used shipping lanes leading in and out of the Panama Canal, an inspiration came to me for the Bible verse I wish to incorporate into the design of a painting I will make. I plan on putting the painting with others I will create into a book, which I hope to publish after the conclusion of Joyful’s circumnavigation. I wanted to use a verse which is dear to me and might inspire others, that would reflect the concept of a strong anchor holding fast to the ground amongst certain known dangers around the anchorage; the shipping lane, the lee shore, the open sea, and other boats and ships. Therefore, the Bible verse I wish to use in the design is, Psalms 9:10-12 “And those who know Your name put their trust in You, for You, O LORD, have not forsaken those who seek You.”

1. On this photo of Joyful’s chart plotter, you can see the actual spot (look for the white boat shaped icon) where Joyful anchored at the Isla Flamenco anchorage on the west side of the island and the fuel dock in the marina on the north side. 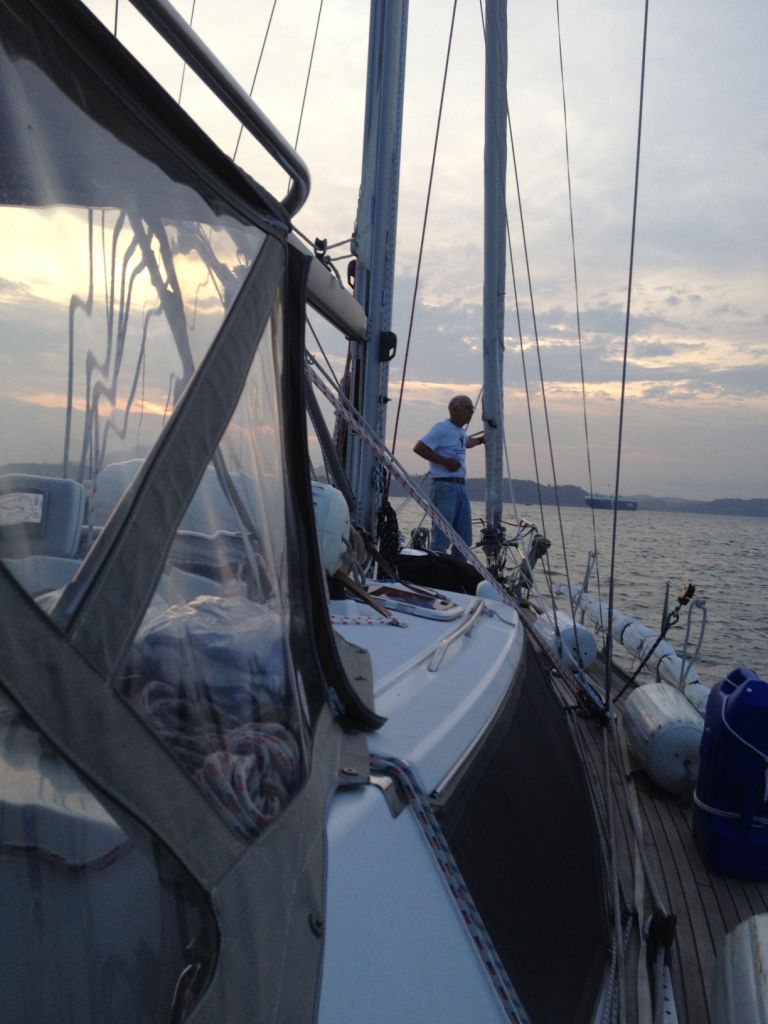 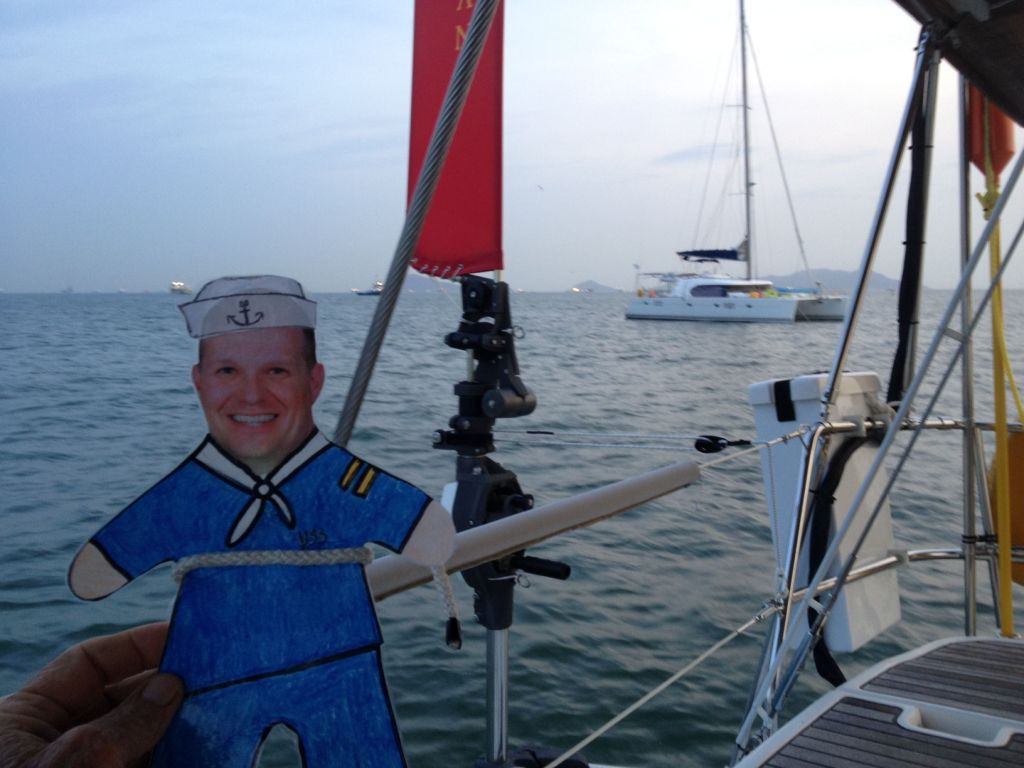 3. Flat Mr. Davis checked to see if Joyful’s anchor was holding at the Isla Flamenco anchorage. 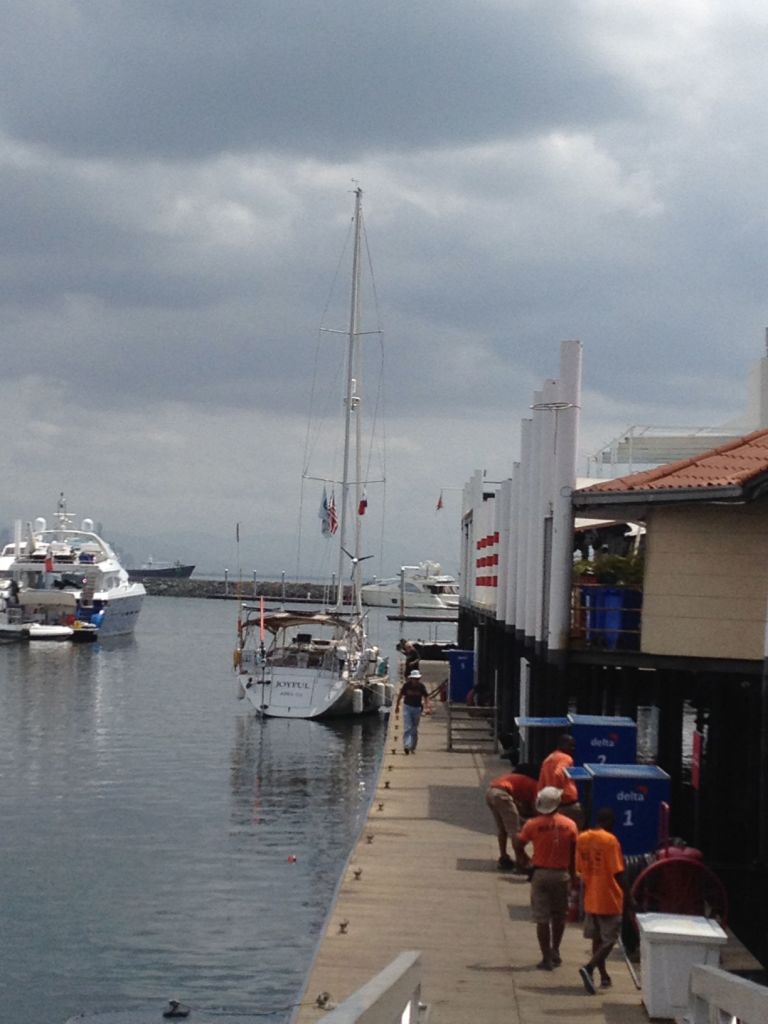 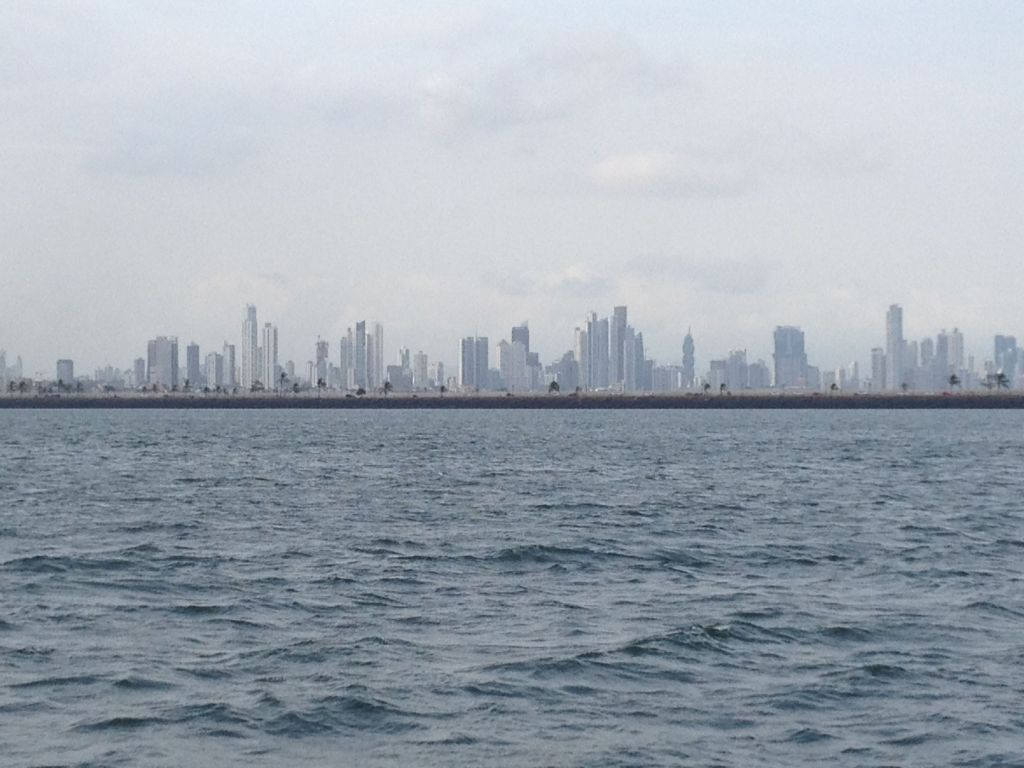 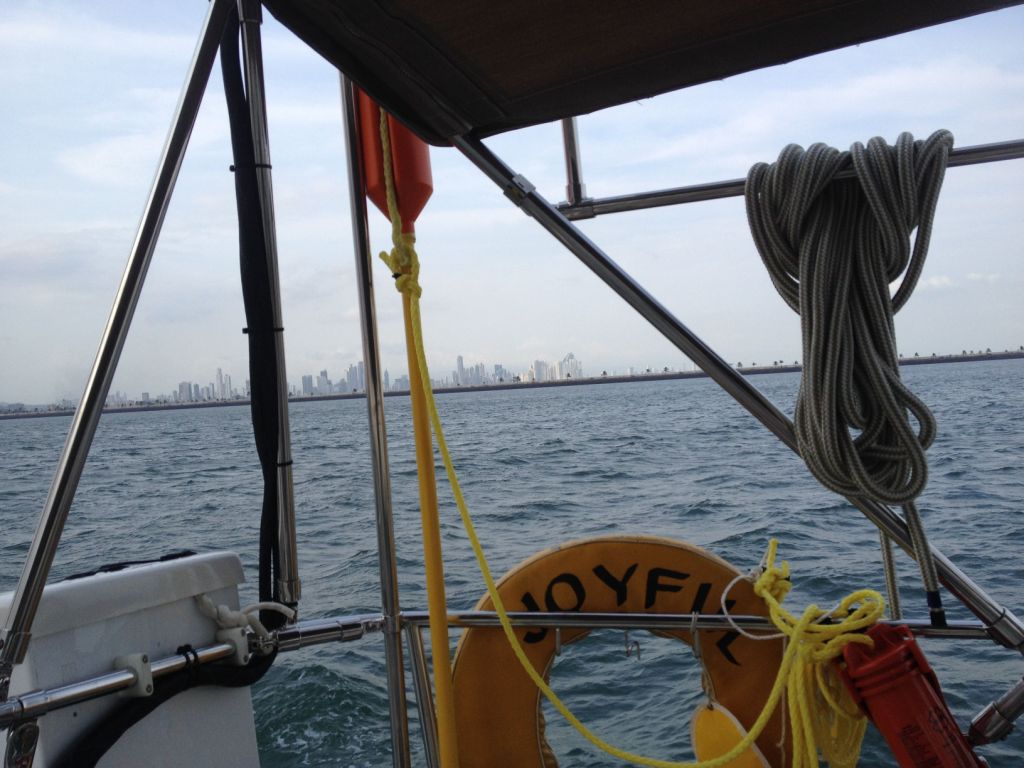 6. After Joyful refueled, she left Isla Flalmenco and Panama City and was bound for Nuku Hiva in the Marquises Archipelago in French Polynesia, 4,000 miles away.

This entry was posted in Uncategorized. Bookmark the permalink.
Go to mobile version