The eight day passage between Nuku Hiva and Bora Bora was another awesome time at sea – lots of sunshine, countless stars, several birds, and the beautiful Pacific Ocean. The winds were very mild, so mild that we had to sometimes sail, motor sail, or just motor in order to be in Bora Bora to meet the rest of the BPO fleet. This takes lots of thought because we never want to run out of diesel fuel for Joyful’s engine. Even though Joyful has powerful sails, sometimes conditions at sea or near a landfall are such that we would like to use her engine. That’s why, because even though we have the luxury of having an engine on board, we try not to use diesel in an unnecessary fashion.

Land Ho! Bora Bora Ho! On the eighth day at sea between the Marquises and the Society Islands, we sighted one of the most magnificent, breathtaking sights in the world… the volcanic peaks rising straight up out of the sea…Bora Bora! Joy abounded on Joyful! I was very happy and excited to steer Joyful, through the narrow passage in her coral reef, into Bora Bora’s peaceful lagoon. Now was the time to realize that dream! Bora Bora is a real volcanic island, surrounded by a coral atoll, the kind I’ve seen in magazines all my life! We already had our “game plan” for Joyful to approach the coral reef surrounding this tiny island in the South Pacific. We would enter the dangerous pass between the coral reefs by engine, Joyful’s 55 hp Volvo Penta diesel, but Joyful’s sails were ready to use immediately if the engine had trouble. Our anchor was ready if needed, Joyful’s fenders and dock lines were ready. The GoPro camera my sister kindly gave us was attached and turned on to record the approach to Bora Bora, the Pearl of the Pacific! Thank you so much, Cathleen! We love you!

As always, I prayed to the Holy Spirit to help me make good decisions and actions as I steered Joyful through the pass cut through the coral reef and into the crystal clear lagoon, and up to the floating dock of our destination. Jeff and Bill stood ready by the sail controls in case we needed to raise the sails as we approached the pass cut through the coral reef. We could see and hear large crashing waves all along the coral reef on both sides of the pass. I wanted to keep looking at that amazing sight, but I had to give total concentration to steering and controlling Joyful’s speed. Jeff and Bill helped locate and identify certain crucial aids to navigation called, port and starboard marks, which showed the entrance through the pass between the coral reef, isolated danger symbols called cardinal marks, and for the leading lights/day marks used as guide lines for navigators and helmsmen. Just as we approached the pass, I noticed extra turbulent water between the port and starboard ends of the pass, so I increased the RPM on the engine before we motored through that area. I needed to keep Joyful on course and not allow the turbulent water to force her onto the coral. Extraordinary blue water of all tropical, light shades entered into my field of view, but my concentration was still on controlling Joyful, and to identify navigational marks. Later, on the GoPro camera, I could see the entire scope of beautiful, remarkable Bora Bora!

Thank the Lord, all went exceeding well throughout all those challenges, and we continued to be blessed as we approached the floating dock in front of kind Teiva’s beautiful Polynesian house right on the shore of the lagoon, where we are staying in Joyful during our time in Bora Bora. Thank you Teiva and Jessica! Even as we arrive to this island of Bora Bora, the Pearl of the Pacific, we are meeting friendly Polynesian locals, as well as local Frenchmen, and are in awe of the natural beauty of Bora Bora’s volcanic mountain and crystal clear sea.

While on passage from Nuku Hiva to Bora Bora, we sighted many exotic birds flying around and past Joyful. Unfortunately, it was sometimes impossible to take a photograph of them because they didn’t tend to warn us of their aerial approach. Other times, the motion of the sea prevented us from holding a camera, but we tried! But, even if a photo has a very blurred image of a bird, scientists at the Cornell University Laboratory of Ornithology, who are studying the migration patterns of birds and wish data and photos regarding any bird sighting from Joyful during her circumnavigation. They can usually identify birds by their silhouettes, even if it is out of focus!

The Duke of Oxford is what I named a fancy looking sea bird who flew around Joyful several times during this passage and the long passage from Panama to Nuku Hiva. It was the magnificent brown booby, Sula leucogaster, Order: Suliformes, Family: Sulidae. Its conservation status is “least concern”, indicating it is quite common. However, individuals and the entire population of brown boobies are always in danger of eating plastic that ends up in the sea, getting tangled in fishing line, getting soiled by oil spills, and other harmful threats caused by the actions of human beings. This strikingly beautiful sea bird had a white beak which had a pointed end but turned into an angular, squared off shape that ended beyond his eyes! He had shiny blackish brown feathers on his back and wings, a bright white chest and undersides, and an impressive display of aerodynamic maneuvers allowing him to fly up high above Joyful’s mast and swoop downward, right above the waves without getting one feather out of place! I called him the Duke of Oxford because he looks quite dignified, and his coloring reminds me of the brown and white (I also had a black and white pair) Oxford shoes my mother made me wear while in high school!

The daily dosimeter readings on the passage from Nuku Hiva to Bora Bora were between 6 and 15 counts per minute (CPM).

Artistic Inspirations from the Lord About this Passage – 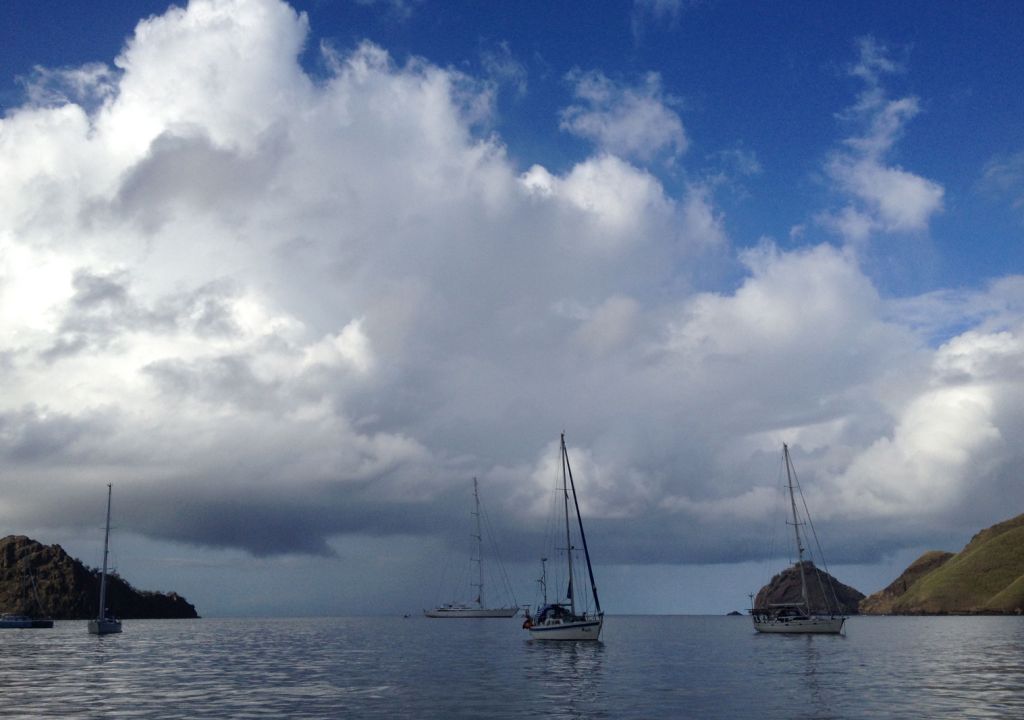 1. As Joyful depared her anchorage in Nuku Hiva, bound for Bora Bora, whe sailed past a breathtaking yacht named, M5, which is the world’s largest sloop (75 meters long), at anchor in the far distance. 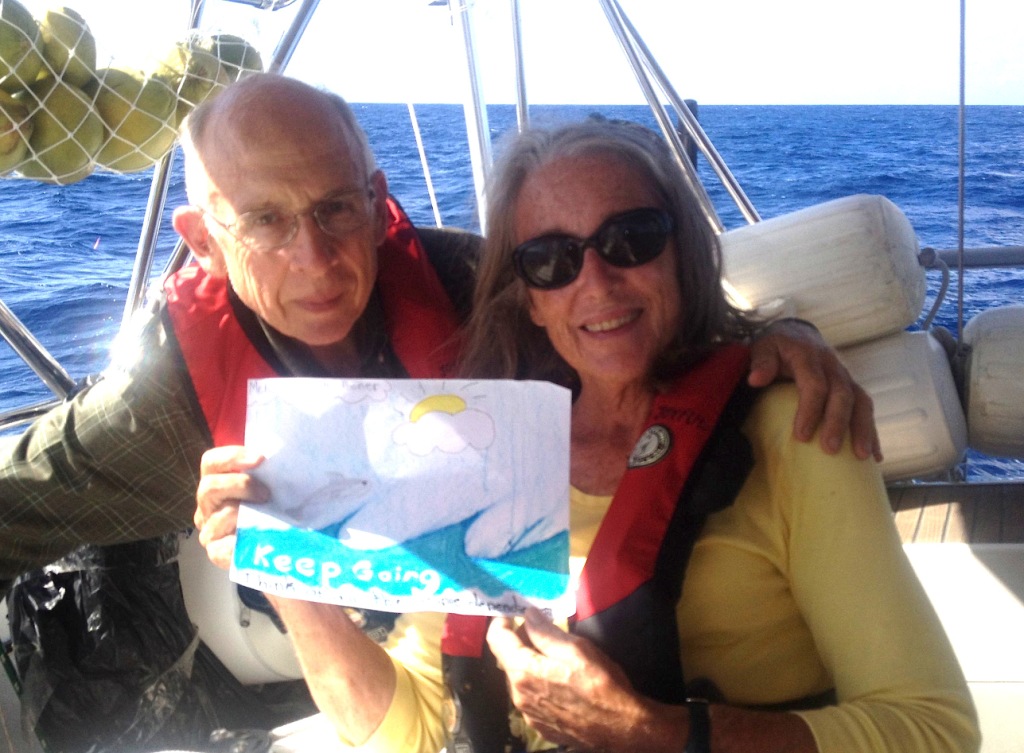 2. Jeff and Anne opened a colorful handmade card made for us by a thoughtful Round Hill Elementary School student. We opened it to celebrate the start of Joyful’s passage from Nuku Hiva to Bora Bora. We liked it! Thank you! 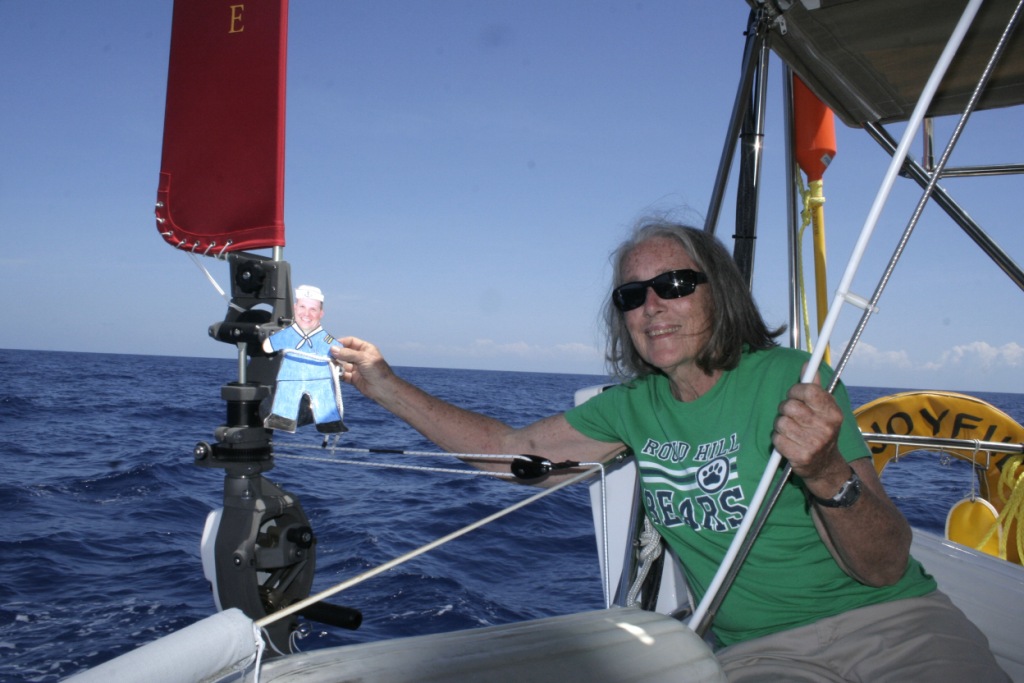 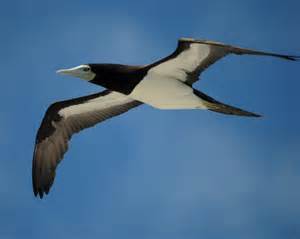 4. We saw a lot of brown boobies enroute from Nuku Hiva to Bora Bora. One even welcomed us as he sat on the top of a navigational buoy which marked the pass through the coral reef into the Bora Bora lagoon!  This photo is from the internet. 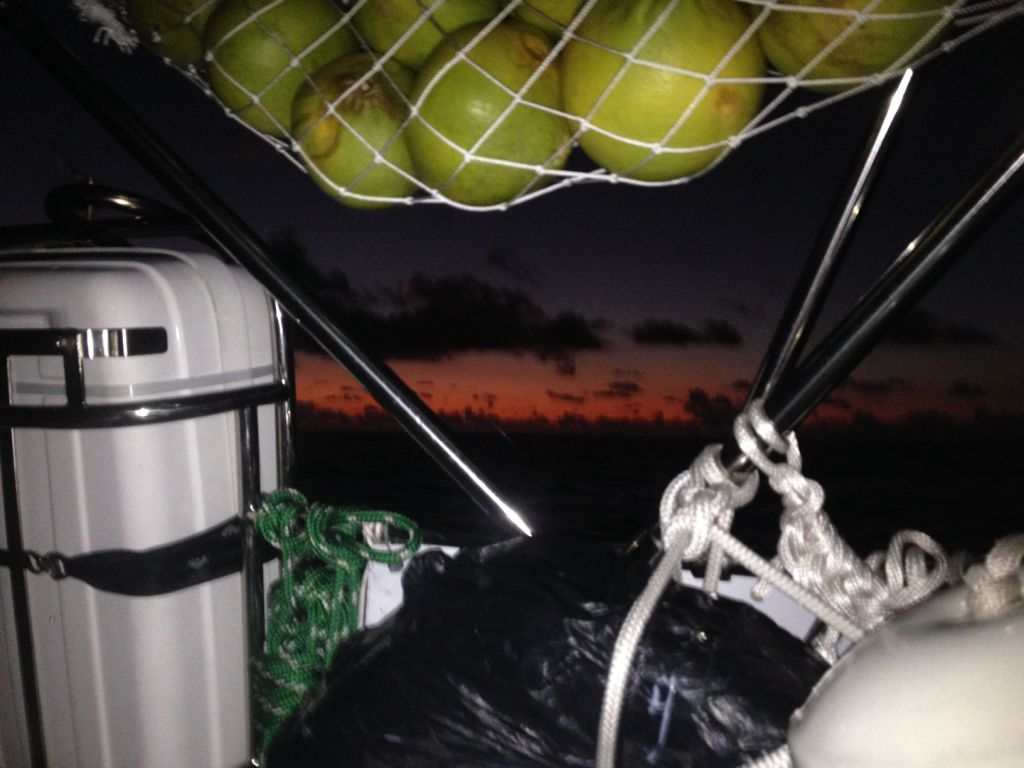 5. A remarkable fire hued sunset graced the Northwestern South Pacific sky with Conchita’s pamplemousse suspended from Joyful’s bimini.  The black car tire is one of the tires the line handlers used in the Panama Canal to protect Joyful from harm.  We noticed it on the way to Nuku Hiva! It actually came in handy on the way. 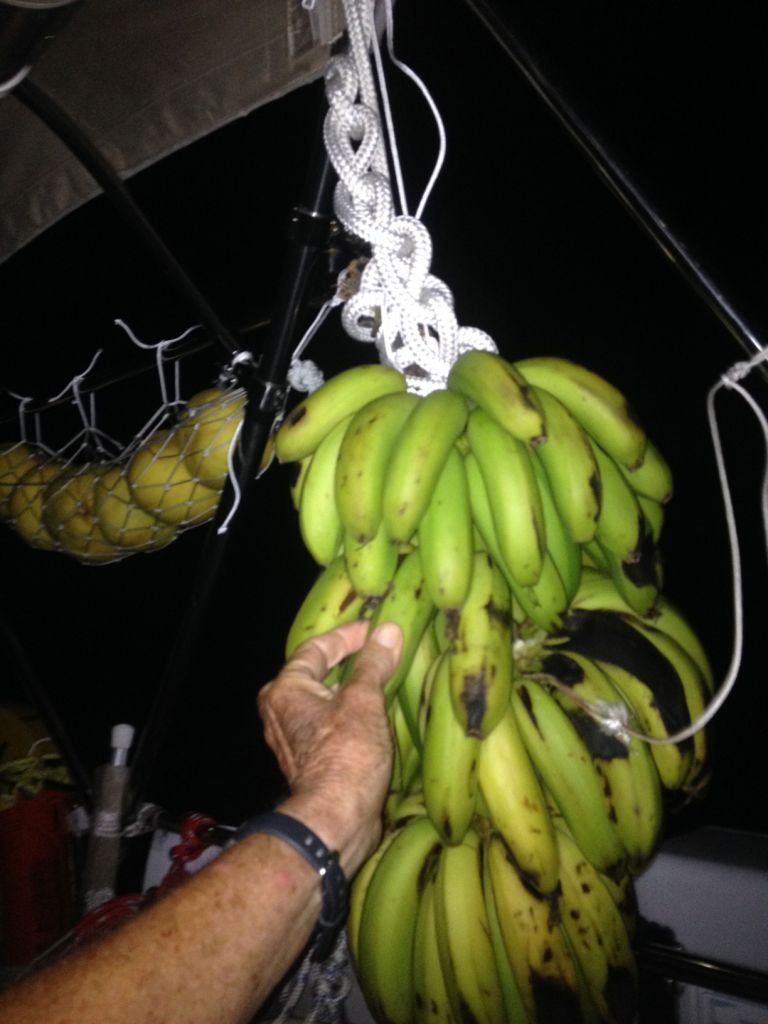 6. Anne tended to the bananas Conchita grew in her garden in Nuku Hiva. The bananas weighed about 50 pounds, and had to be tied very carefully to Joyful’s stainless steel bimini structure with several ropes. 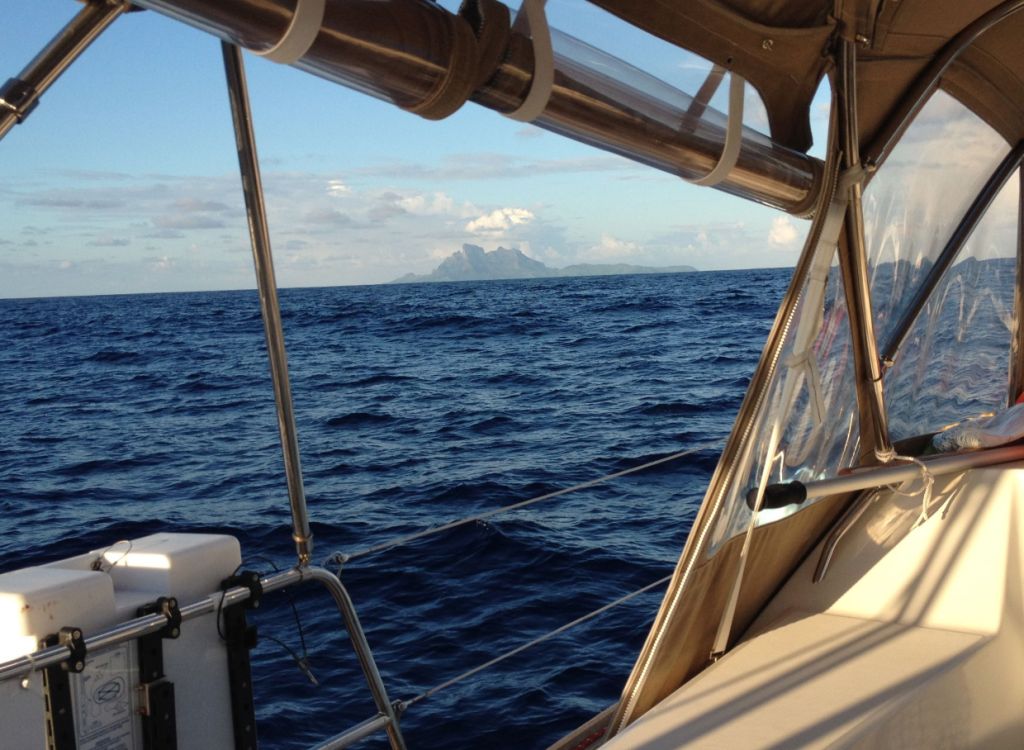 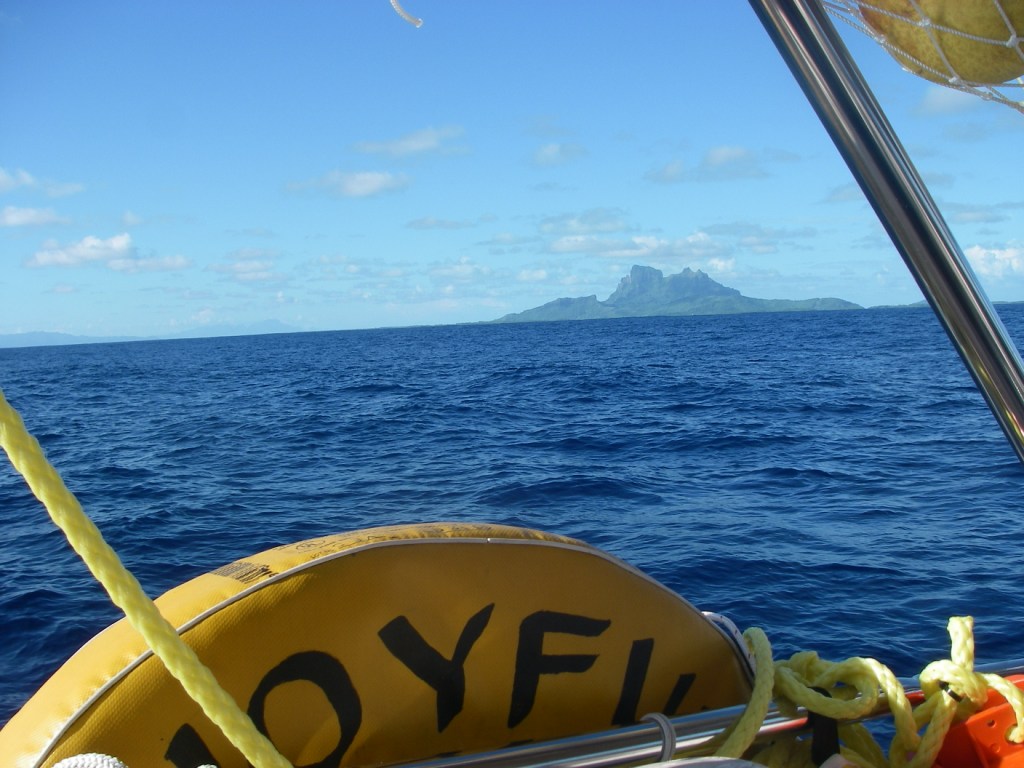 8. A photo of Bora Bora from Joyful’s helm as we sailed to this gorgeous island known as, “The Pearl of the Pacific.” 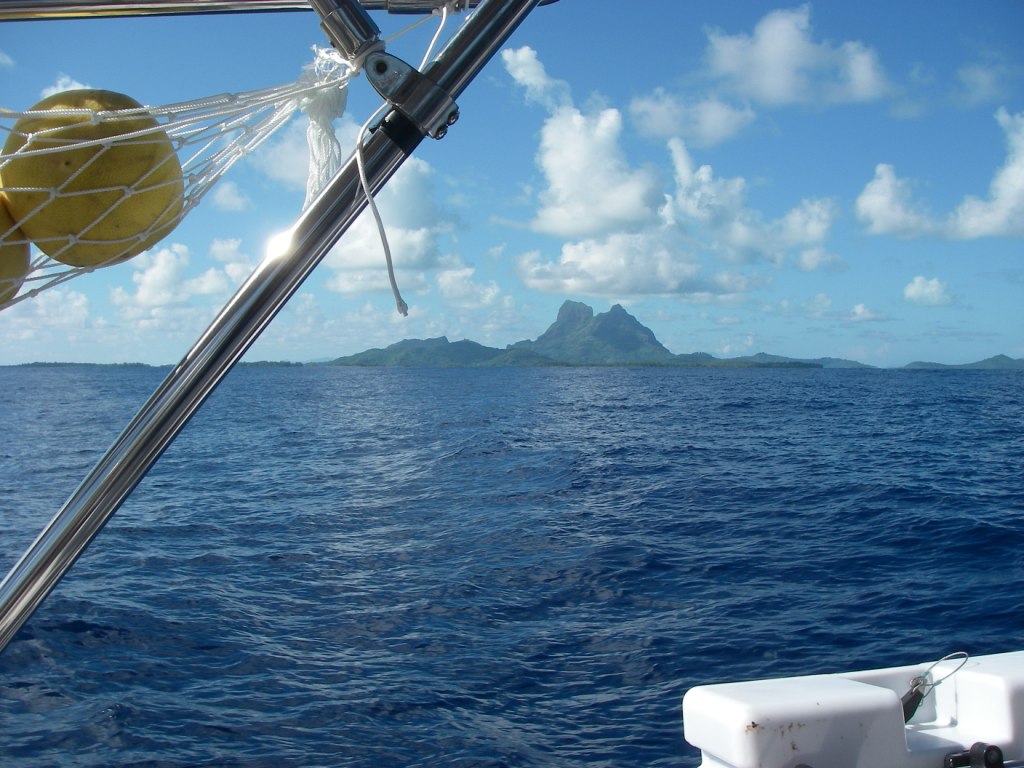 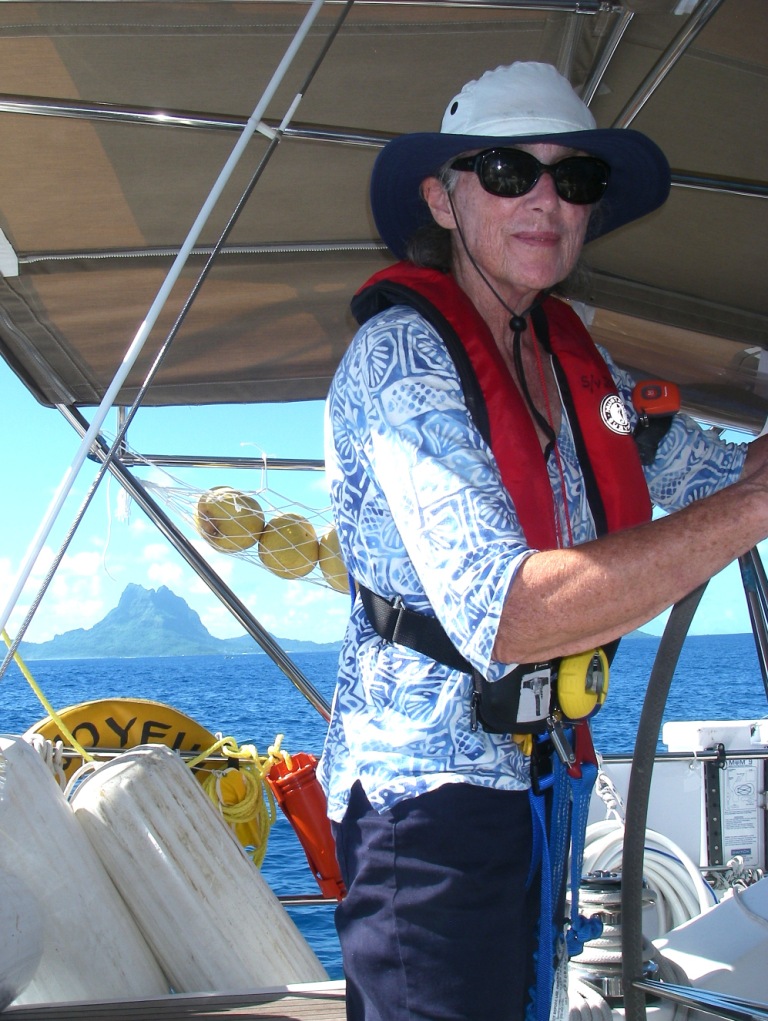 10. Anne was at Joyful’s helm as Bora Bora called a warm Polynesian welcome to Joyful. 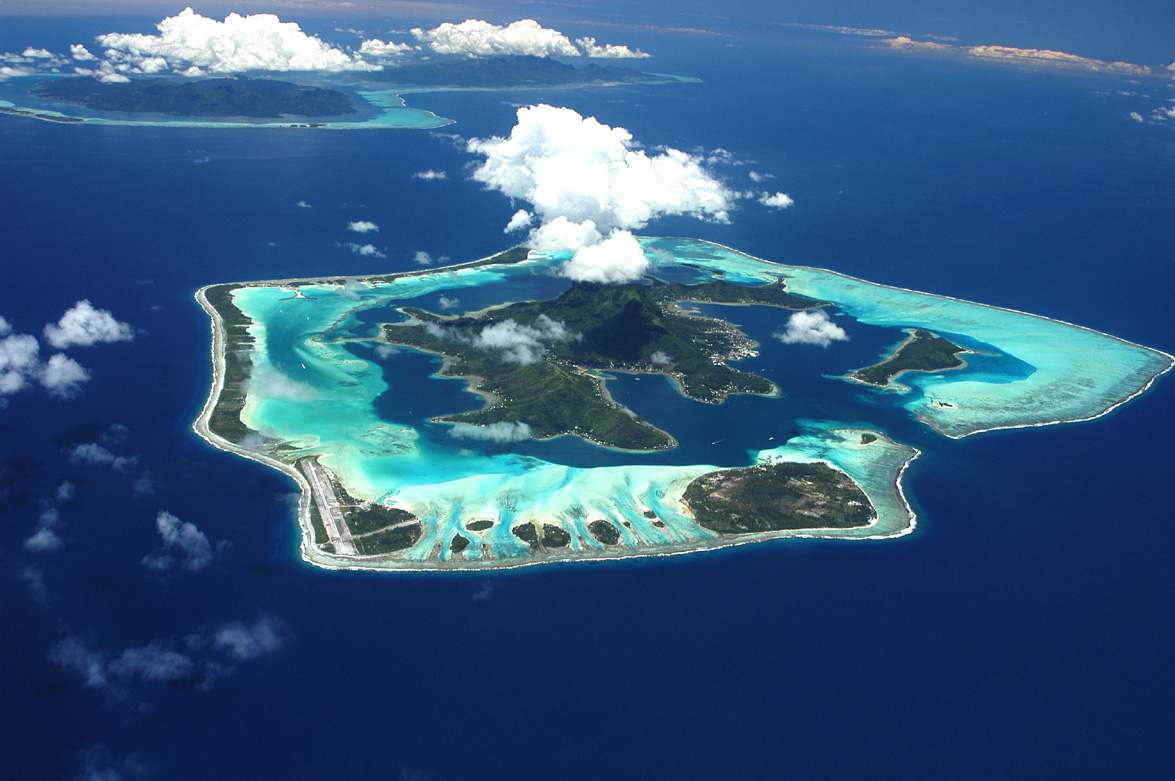 11. Bora Bora as seen from the air. The pass through the coral reef can be seen in the lower right hand side of the picture. This photo is from Bora-Bora, amriholiday.blogspot.com. 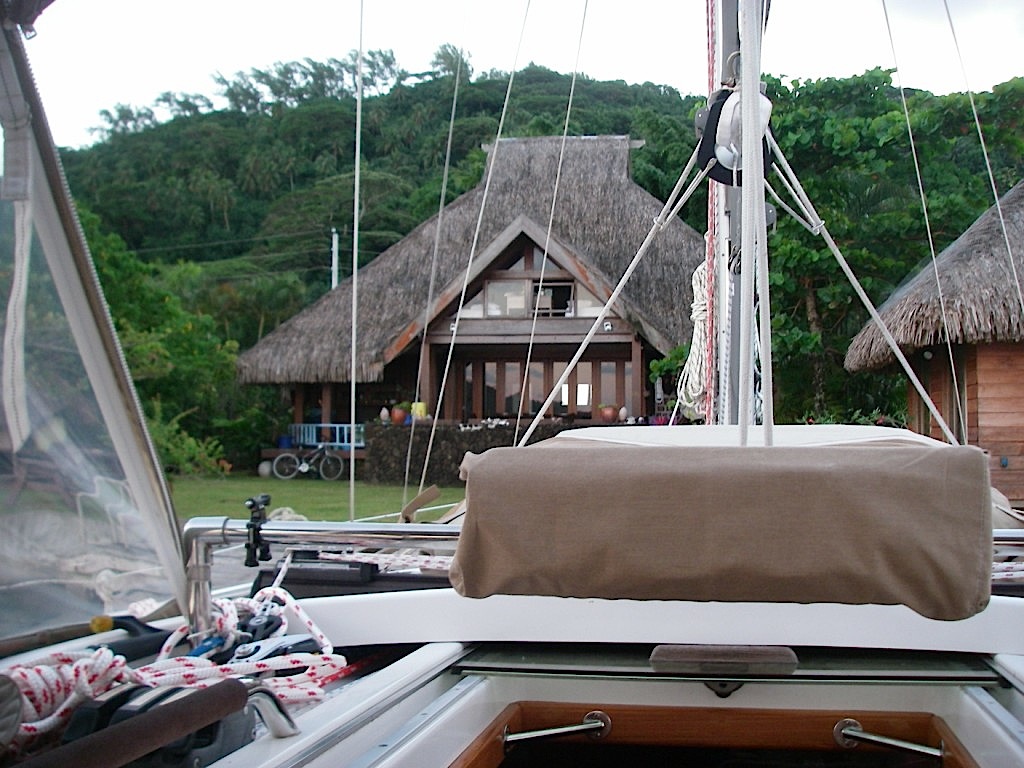 12. Joyful was invited to stay at Teiva’s floating dock by his beautiful Polynesian house. Thank you, Teiva and Jessica! Mauruuru!

This entry was posted in Uncategorized. Bookmark the permalink.
Go to mobile version